Financial awareness in the society

Also in my opinion FIRE will always be something for a small minority, as it is something that is extremly hard/impossible to achieve with an average salary.

I think something like the following would be interesting and motivating for most 18 year olds - as it seems kids want to become bloggers or influencers and get rich with the minimum amount of effort!

Summary: it Discusses how long it might take to save 1M in different jobs under different assumptions

How Long Does it Realistically Take To Save a Million Dollars?

I think in this example a few important things are missing

Oh, I though about two of them. I doubt that the intended audience for such kind of explanation is very concerned or even aware of inflation

As for pension from 1st and 2nd pillar, you can refer to Ergänzungsleistungen (though beware, there seem to be cases and court rulings where they’ve been denied where the applicant deliberately or recklessly lost wealth) or emigration to countries with lower cost of living (e.g. Thailand).

As for the AHV/AHVs contributions, they don’t seem that high.

This article says 32 years on average. 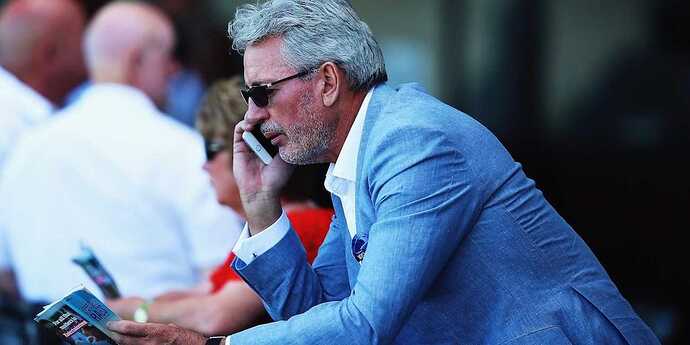 Unfortunately, getting rich quickly is a rare phenomenon.

Of course the answer depends on the variables: income, expenses (or savings rate) and return on savings (Including any debts eg loans for studying or mortgage)

I think almost everyone knows this, and everyone understands compounding, but somehow never internalise the practical implications or put it into practise

Shall we turn this thread in something productive and brainstorm what content would be needed to be covered in a let‘s say slidedeck which then could be turned into education material (e.g. YouTube videos or some online course)? I feel like we could try to make an effort to atleast make young people aware of the knowledge gaps.

I think we have three things to look at here.

First: We need to give young people a context that makes sense to them

For example, we read De rerum natura by the Roman poet Lucretius. This text is an important source for Epicurean philosophy. But we had no idea. Maybe we were told, but we certainly didn’t know what it meant. Also because our philosophy teacher preferred to read Immanuel Kant – with 16-year old teenagers!

We were completely and utterly lost. Many of the things that I was supposed to learn at school made no sense to me because I had absolutely no context. We were doing things because the teacher said so. And they failed to give us context.

Second: We need a better balanced and high-quality education

I agree that Latin poetry is important. In hindsight, I do not regret the time spent at school reading Latin. Actually, hardly anything that I learned at school was superfluous. But some important things were missing or of low quality: No education in finances, a history education that left out many important pieces, math classes that failed to include linear algebra (I learned that from scratch at the University, but most other students seemed to know at least the basics already), German classes that skipped the some of the most important authors and books, etc

Third: A reform of our pension system

I believe that the current pension system worked fine in a demographically and politically different world. Yet now we have a lot of people about to retire and switch sides from contributors to beneficiaries. And interest rates are at an all-time low. That’s poison for a system like ours. Also, I believe the system is unnecessarily complicated. Especially the 2nd pillar is absurdly complicated. Considering that people a) do what’s easiest and b) postpone tasks to the future if they can (especially the young), I conclude that c) we need an easier and demographically more robust system. This is not the place to start coming up with ideas, and I’m certainly not the best qualified person for the task, but I think we need to rethink some aspects.

If you spend half of your salary, it means that if you work 20 years, you have saved enough to live for at least 20 years without working. You can somehow guess that part of the money you pay in taxes during the first 20 years will go to AHV anyway and another part will be used for new hobbies. The calculation you did was to reach the pension age. What do you do after that? The pension will be lower because of 20 years of minimum payments. That would be interesting to calculate. Unfortunately the AHV calculator doesn’t allow to play around that easily (anyone has a google sheet to simulate it?)

(also I’m not sure how to fill the last years. Probably with a yearly salary of 10000 to simulate the wealth payments of ahv?)

Probably with a yearly salary of 10000 to simulate the wealth payments of ahv?)

I know 2nd pillar it’s part of my NW, but never considered it in my FIRE calculations. Also, not sure how do I see how much I have in my 2nd pillar? Might reconsider including it, based on all comments from here…

Also, not sure how do I see how much I have in my 2nd pillar?

You should get a yearly notice confirming how much is in the 2nd pillar. Ofherwise ask your HR department for it.

Offtopic, but I think it pretty well summarizes my impression about this discussion. 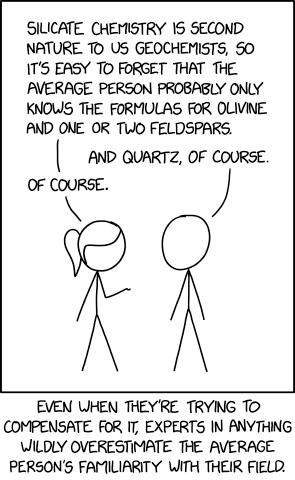 If you spend half of your salary, it means that if you work 20 years, you have saved enough to live for at least 20 years without working. […] What do you do after that?

Let me try to tackle this question, and I’ll answer as if I was talking to someone who never heard of FIRE. For simplicity, let’s assume the prices remain constant in time (i.e. there is no inflation).

If you don’t spend money now, but in the future, you’re postponing consumption. And that’s how the majority of the society views saving. I don’t spend today, so I can spend it in the future. Doing it like that, you’re right, it’s simple math that if you have spent and saved 1’000’000 over 20 years, it will last you for another 20 years.

But it’s important to remember that money is not just used for immediate consumption. Money gives you the promise, that someone will provide you with a physical resource, or with their work. By not spending money immediately, you’re accumulating power to tell people what to do. And you can benefit from other people’s work.

Let’s assume your annual income from the age of 20 to 40 is 100’000 and that you’re spending 50’000 annually until you die. You first spend your salary savings, then the savings from your investments.

If you get a modest 2% annual return, it will already move your “bankruptcy” from the age of 60 to 74. 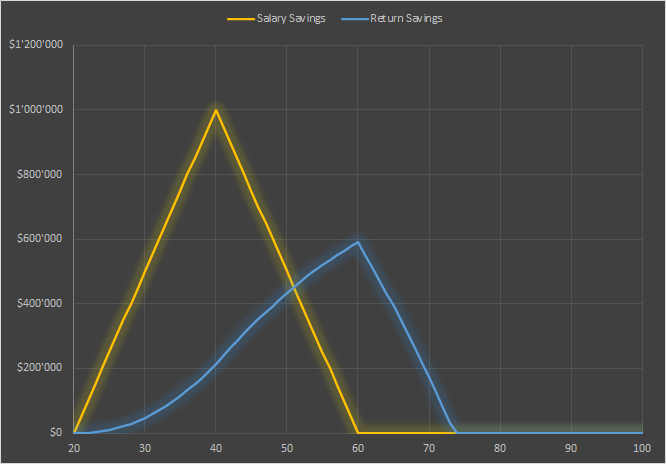 With a more impressive 3%, you will survive until you’re 96. 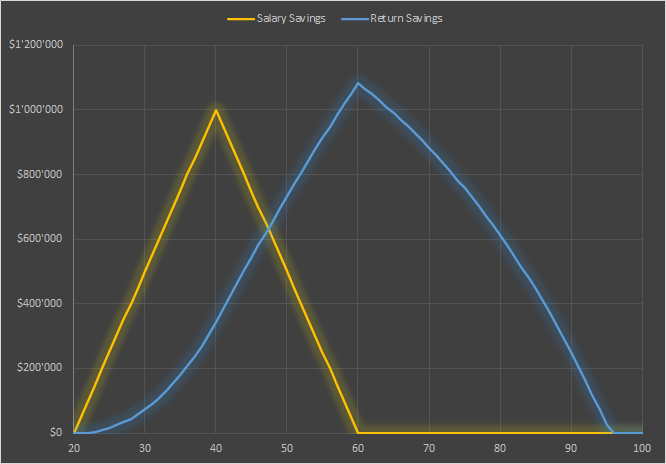 With 4%, you will never run out of money and die a rich man. 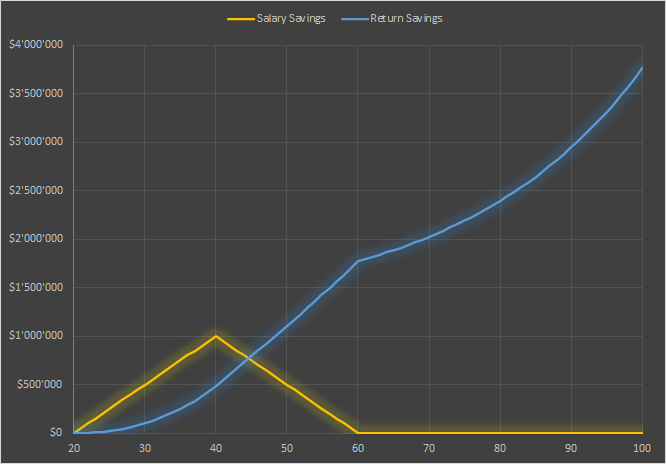 Love the power of a good graph!

Did you do that on google sheets? how?

Nah, in Excel. Chart type X Y and then chose the dark theme from the presets.

Last week I talked to a friend of mine… and was reminded of this thread.

They’ve both been dating other people over the years, but neither have entered stable relationships yet. At least that’s what he thinks of his wife, he doesn’t really know what her love life is. He says he’ll ask for a divorce once he’s found a new partner.

He says they are still married “for financial reasons, they save so much taxes like this”. Yes, he knows he’ll have to give her half of his 2nd pillar, so “longterm this might not make sense”.

He had absolutely no idea what “give her half of his 2nd pillar” actually meant. He didn’t know how much his was to expect neither from the 1st pillar, nor from the 2nd. He doesn’t have a 3a.

I told him to find somebody to run some numbers for him. – “Ah, yeah, maybe, when I get around to it…”

I told him that for all we know, she did exactly that and that’s why she isn’t filing for a divorce. – “Oh, you think so, hmm maybe I should really look into this…”

And then I decided it was better to change the topic…

What the hell. I don’t want to know how much this will cost him.

Are they at least officially separated? This date is relevant.

I don’t want to know how much this will cost him.

Who says he’s not going to benefit?

The assumption is just plausible and probable.

Who says he’s not going to benefit?

I forgot to add that he earns at least twice as much as she does.

Are they at least officially separated? This date is relevant.

He moved out only a few years ago.

EDIT: Come to think of it, how much of an influence does this have? Is this taken into consideration in some way?

As a lawyer: YES.

For divorces you have two paths: joint request for divorce OR action in divorce.

The first one is basicaly an agreement between the future ex-spouses who agree on several points for their future. For example, they can decide to not split the 2nd pilar and to not split their savings (3a, bank account, etc.). But, as it is an agreement, both of them need to agree on EVERYTHING they want to set up in this agreement. It works fine if the spouse are in a good relation, it happens more than you can imagine, fortunately.

The second option is the typical divorce where everyone will lose something and destroy the other. But for an action of divorce, you need to have at least 2 complete years of seperation, this is why the separated date is truly important.